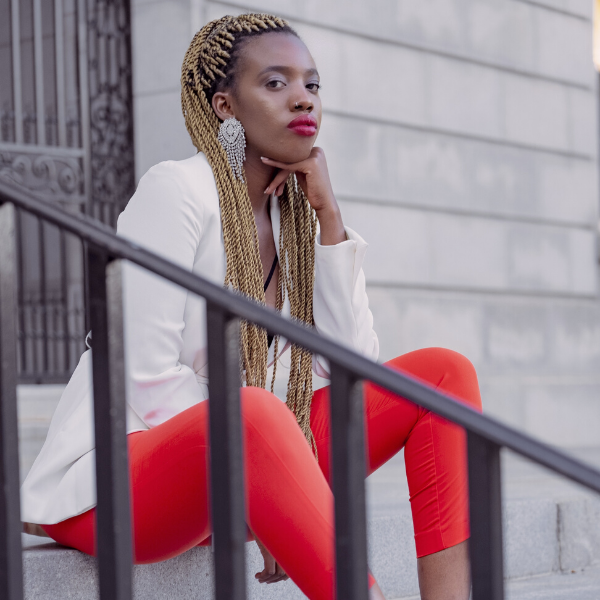 “I am invested in centering African women and the liberation of Africa as a continent, and I want to focus on creating a space for young feminists to be heard, seen and understood.”

Judicaelle Irakoze has called herself “ungovernable,” “disruptive” and an “Afro-political womanist.” There’s no single way to describe her work. At 24, Judicaelle is a writer, entrepreneur, speaker and advocate for young women, especially those in Africa. Raised in Bujumbura, Burundi, she came to the U.S. when she was not quite 18 to attend college. Soon after, in 2015, her country’s president decided to seek a controversial third term. Protests erupted and members of his ruling party’s youth league began a series of brutal gang rapes apparently targeting the families of government opponents.

Judicaelle authored a Washington Post piece in response. “Burundi Stop Rape” went viral and Judicaelle was blacklisted at home. Exile was painful – she was denied the chance to attend her grandmother’s burial – but led her to discover and embrace radical feminism, which since has shaped all she does.

Judicaelle is Executive Director of Choose Yourself, which she founded “to empower the next generation of community leaders.” She also has been a delegate at the International Congress of Youth Voices and a member of the 2019 European Commission Young Leaders.

You’ve said that leaving Burundi helped free you. What do you mean by that?

I grew up in a culture where as a woman, you feel constantly watched and judged: how you talk, what you do and wear. You have to be respectable and perfect. In the U.S. there was a sense of being seen but without that burden. I was allowed to just be. Learning feminism gave me a chance to redefine my own womanhood, which meant unlearning a lot of things and also learning a new vocabulary to name experiences I’d had back home.

I have four sisters and one brother, so I come from a family made mostly of women. The women who raised me were strong, but their survival required that they surrender power. When I was nine, my brother was given my father’s name in the traditional way, but my sisters and I weren’t. Even though our parents were educated and raised all their children with the same opportunities, they saw the continuation of legacy through a son, not daughters – because girls were going to be given away to another family. I was angry, but I didn’t have a name for patriarchy back then.

So your introduction to feminism changed your life?

Oh yes! I came to the U.S. to study biochemistry and ended up in political science. After reading Angela Davis [American political activist and author], I moved from the idea that ‘women need to be empowered’ to the understanding that ‘there are systems that need to be dismantled before we can even talk about that.’ In Let Us Rise Together, Davis says that “Radical simply means ‘grasping things at the root.” You can’t talk about gender inequality without talking about the root, which is patriarchy.

I went through a phase of constant anger, then started being vocal in social media as a Burundian. Even though I was attacked for it, other women could draw strength from that boldness.

What in particular led to the creation of Choose Yourself?

It came during a painful period. After my Washington Post piece appeared, I wanted to go home and couldn’t, and I needed to do something. Over 350,000 Burundians fled the country after the crisis in 2015. I visited Mahama camp in Rwanda, which is home to more than 50,000 displaced Burundians, and organized a fundraiser for the women. I also spent a month and recorded a lot of their stories. Refugee camps are among the worst places to be a woman; the violence that women endured in their home country is still going on. That’s when the idea of the organization came. The name comes from the fact that in our culture we are raised to care about everyone but ourselves. We must raise a generation of girls to choose their own well-being first.

We have several programs now. Girl Talk is a space for women to meet and talk about their experiences; we operate in Rwanda, Uganda, Kenya and Burundi. Home Away is specifically for refugee girls and women, who with children make up 80 percent of the camp populations. The problem with the refugee crisis in East Africa is that there isn’t any program other than keeping people in a camp. We have a whole generation that has never lived anywhere else. Our main goal is helping integrate women into host country communities. We deliver funds that help women start a business outside the camp.

Do you plan to continue this work?

I would like to return to Burundi as soon as I know I can be safe. In the next five years I want to expand Girl Talk into every African country. I am invested in centering African women and the liberation of Africa as a continent, and I want to focus on creating a space for young feminists to be heard, seen and understood.

You’ve said that your goal is to “dismantle patriarchy” and that you realize the struggle will be a long one. Do you also see signs of progress?

I’ve engaged with activists who came before me who’ve told me how they had to tone down their voices and dilute their politics to be heard. I’ve made radical comments and shared radical ideas – that’s progress. As your voice is heard, another young woman is being seen and understood. At the same time, it can be hard to identify what is collective progress. In one place you see progress, while in another, things are falling apart. Maybe women in Rwanda are embracing feminism, but women in South Africa are being killed. Then I remember Angela Davis’s words: “Sometimes we have to do the work even though we don’t yet see a glimmer on the horizon that it’s actually going to be possible…You have to act as if it were possible to radically transform the world. And you have to do it all the time.”

Learn more about Choose Yourself and their amazing programs on their website.